People consume caffeine (or coffee, to be precise) to kick-start their nervous system. Grabbing a cup of coffee while going to work is now habitual for most. As a downside, caffeine can also disturb the sleeping cycle. Therefore, it’s advised to not consume caffeine hours before going to sleep. But how long exactly it takes caffeine to wear off? In this article, we answer this intriguing question.

How does caffeine work?

Caffeine is an alkaloid and a stimulant found in many plant species. Coffee beans and cocoa beans are the primary sources. But they’re also found in tea leaves, kola nuts, guayusa, and 60 other plants.

When you consume food containing caffeine, the alkaloid breaks down and acts directly on your central nervous system. You’ll notice the most significant effects when it reaches your brain, and you feel more awake and alert.

These effects can take a few hours to materialize. Caffeine is absorbed from the stomach followed by the bloodstream, which then transports it to different parts of the body.

In the central nervous system, caffeine blocks a compound called adenosine from binding with the A1 receptors. This, if you know, causes sleepiness.

Besides that, caffeine also increases the heart rate and blood pressure to help you feel more awake.

How long does caffeine stay in the body?

Now that you know how caffeine works, you must be wondering how long it stays in the body.  Multiple studies have researched this topic. One of the most cited ones is the one conducted by the American Academy of Sleep Medicine. As per the study’s results, caffeine’s half-life is about 5 hours.

Half-life is the amount of time it takes for a substance to be reduced to half its original amount.

But you aren’t likely to stay energized for 10 hours. You’ll feel the effects of caffeine within half an hour of consuming it. Then once it reaches the liver, it is quickly metabolized. If consumed in the morning, you’ll have very little caffeine left in your body by evening.

The main noticeable event is sudden bursts of energy. You’ll feel more awake and jittery as coffee reaches its peak level. After a few minutes, you’ll feel the need to urinate. The more coffee you drink, the more intense the effects will be.

But 10 hours is just a benchmark. How long caffeine lasts in your body will also depend on dosages, BMI, age, tolerance, among other factors.

How much is too much caffeine?

Anything above this is considered too much. If you’re drinking too much, you’ll see symptoms like headache, nervousness, insomnia, abnormally frequent urination, irritability, among others.

People with caffeine sensitivity will feel the effects for several days. Therefore, it’s advised for them not to consume caffeine in any form.

Caffeine interferes with the central nervous system and hence influences sleep. Even in the afternoon hours, it can interfere with sleep to some degree.

Since the caffeine stays in the body for 10 hours from consumption, you should ideally not drink coffee 10 hours from going to bed. Morning is the best time to consume coffee, evening and night hours being the worst.

This a general rule that goes well for most people and easy to follow. As the caffeine concentration goes down, adenosine binds with A1 receptors once again.

This causes the muscles to relax and hence why you feel sleepy.

Caffeine (read coffee/ristretto/espresso) is an excellent way to start your day. It can get you through a dull afternoon too. But it can break your sleep cycle if you consume it in the evening. That’s where you need to control your craving for coffee.

Hi there! My name is Arianna Koss. Some of my friends call me a coffee freak, but I admire coffee and it’s my passion. I love to have lattes and espressos, and even worked as Barista for 3 years! I have created this blog to share the recipes and tricks that I have used to make the great cup of joe. Don’t forget to subscribe so that you do not miss out on any updates! 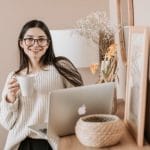 Hi there!
My name is Arianna Koss. Some of my friends call me a coffee freak, but I admire coffee and it’s my passion. I love to have lattes and espressos, and even worked as Barista for 3 years! I have created this blog to share the recipes and tricks that I have used to make the great cup of joe. Don’t forget to subscribe so that you do not miss out on any updates!

Blackbearhartford is a participant in the Amazon Services LLC Associates Program, an affiliate advertising program designed to provide a means for sites to earn advertising fees by advertising and linking to amazon.com.” (source: Section 5).

This post may contain affiliate links and I may earn a small commission when you click on the links at no additional cost to you. As an Amazon Affiliate I earn from qualifying purchases. You can read my full disclaimer.

This website uses cookies to improve your experience while you navigate through the website. Out of these, the cookies that are categorized as necessary are stored on your browser as they are essential for the working of basic functionalities of the website. We also use third-party cookies that help us analyze and understand how you use this website. These cookies will be stored in your browser only with your consent. You also have the option to opt-out of these cookies. But opting out of some of these cookies may affect your browsing experience.
Necessary Always Enabled
Necessary cookies are absolutely essential for the website to function properly. This category only includes cookies that ensures basic functionalities and security features of the website. These cookies do not store any personal information.
Non-necessary
Any cookies that may not be particularly necessary for the website to function and is used specifically to collect user personal data via analytics, ads, other embedded contents are termed as non-necessary cookies. It is mandatory to procure user consent prior to running these cookies on your website.
SAVE & ACCEPT